Elana James is a founding member of the hot jazz and Western swing trio Hot Club of Cowtown. In 2006, performing with the Hot Club of Cowtown, James had the honor of representing the U.S. State Department as a Musical Ambassador throughout Armenia, Azerbaijan and the Republic of Georgia. James became the first dedicated female instrumentalist in Bob Dylan’s touring band in more than thirty years and subsequently toured with Dylan in 2006.

She released her first solo album (Elana James) in 2007 and a second solo album (Black Beauty) in 2015. In addition to tours and recording with Bob Dylan, James has also recorded with Willie Nelson, Ray Price, Merle Haggard and others, and has written, produced and arranged nine studio albums with the Hot Club of Cowtown.

My mom was a violinist in Kansas City so I grew up going to her rehearsals and concerts. She played in the Civic Orchestra at UMKC, was a sub in the KC Philharmonic and then joined as a permanent member when it became the KC Symphony. She and my stepdad at the time played in the pit for traveling shows at the Lyric Opera and at private events. My job was to screw the legs in and out of the harpsichord before and after they loaded it into the Volvo!

Tell us about some of the different forms of music you’ve studied and what you’ve enjoyed about them.
In college in NYC (I went to Barnard) I was interested in ethnomusicolgy. When I graduated I spent the summer at the American Conservatory in Fontainebleau, France playing chamber music on viola, then went straight to India to study North Indian Classical music, also on viola. The time I spent in India was one of the best choices I could have made at that point in my life as it freed me to practice without all the competitive neurosis I had felt in a traditional musical program and gave me time to get in touch with what was truly important to me. 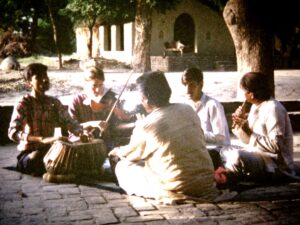 During that time in India, though, my teacher, Pandit Vidhur Malik, used to take us on sunset boat rides up the Yamuna river while he and his handful of students (myself included) would sing and play these traditional, devotional songs together, but one of the things he loved the very most was when he would ask me to play “American git [music]” on my viola, and I would play a hoedown like Bill Cheatham or Bile Em Cabbage Down and it thrilled him to no end. That was very powerful lesson for me because it showed me that as fascinating and exotic as I found his music, he looked at me and my own tradition the same way. I took that to heart and when I got back to the US I got more and more into playing American fiddle music and never really looked back. I began to bloom where I had been planted.

What was it like playing with Bob Dylan?
I think the main takeaway for me from playing with him is that his inventiveness and creativity never stop. At this point he could be up there playing the exact same show, the same songs, the same way, night after night but instead he’s staying in this tradition of improvisation, reinterpreting his material, changing it up. That is a much more vital way to tour and play and he has always done that.

It’s not about the audience, it’s about the creation and the imagination and keeping that portal open in yourself. 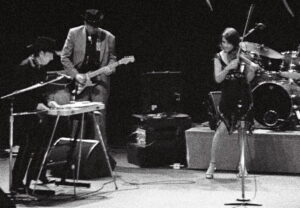 It felt exciting playing with him and coming away with this even more developed idea of how legitimate it is to always be improvising and creating in a live show, no matter how established you may be, and no matter how it may actually come off to the audience. It’s not about the audience, it’s about the creation and the imagination and keeping that portal open in yourself.  That, and, I truly thanked my lucky stars for any commitment I had made to being a musician since I was three years old which had brought me to this point in my career where I could go out every night and have so much fun sharing the stage with him!

How has the pandemic changed your perspective on performing arts? I’ve heard from some people that they’re not really playing at all, others are practicing like crazy. For me, I have so far seen it as a kind of cosmic intervention, an artistic reset. Touring is so grueling, and to do it year after year after year, it’s like campaigning forever for an election that never comes! So these past several months have been a chance to calm down, and also to let the bad habits die out, and to listen again to what is inside me that drew me to music in the first place. It has also shown me that I really do enjoy music as an exchange, a conversation, and that my own satisfaction in music involves sharing it with other people and less just playing for or by myself. I think I hadn’t been as aware of that before—it’s like going to a party and talking to yourself or actually hanging out with people and having a great conversation.

What would you say to students who want to make music a career? Well, I definitely don’t think you should let anyone tell you not to do it. The world of live music and professional commercial music is brutal, and it will let you know if you’ve made the wrong choice! That said, if you have the zeal, that unmistakable calling, listen to that and honor it, whatever it takes. You have your whole life to turn toward other things, other passions, but music is a very jealous one, and it’s important to give it what it needs when you are young, before all the entanglements and commitments of life begin to engulf you.

Go and find your heroes and meet and learn from them, live frugally, play every chance you get. Also, a career in music doesn’t have to last forever. For myself, as time has gone by, I also value the nature of playing music with other people—to sit down with people from anywhere on earth, any age, any nationality, to play a song together and relate in that way. In that sense I also try to stress to any young player that all the Classical technique you develop as a student is just a vocabulary that can be applied to anything you like. There isn’t a single thing I learned that I don’t apply to my own playing whether it’s playing a hoedown, writing a swing tune, transcribing a Stephane Grappelli solo, or just playing scale patterns—your technique is your own personal arsenal to use along your own musical path. It definitely doesn’t need to stop on the page, or in an orchestra, or even in any kind of traditional format. It’s yours to carry forward and blend with your own imagination.

Read more about Elana at elanajames.com