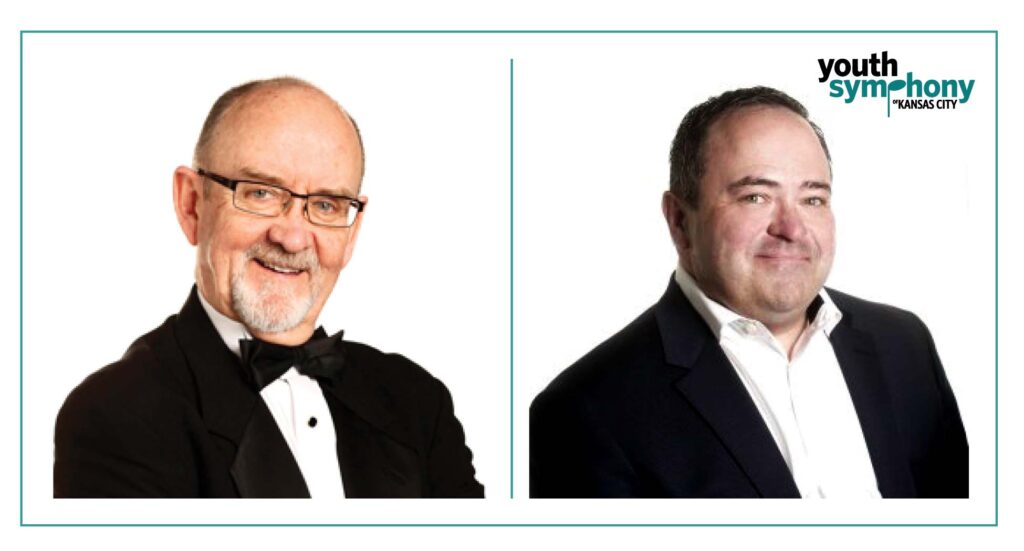 When Berlin originally conducted at Youth Symphony, the program included five ensembles: Symphony Orchestra, East and West Philharmonic, Symphonette Orchestra and Flute Choir. He has fond memories of the group playing at MMEA and traveling to Oklahoma City, St. Louis and Wichita to play with their youth orchestras.

“I felt a lot of pride that I had the opportunity to be a part of such an excellent program,” Berlin said.

The organization’s move to the Loretto has been one of the biggest changes since he left and he’s looking forward to working with Youth Symphony musicians in the Chapel.

According to Berlin, “I enjoy seeing such talented young people who enjoy playing challenging music!”

Mr. Russ Pieken is already a familiar face for Youth Symphony musicians. Though he most recently conducted Debut Orchestra in 2018, he has been Director of Operations for the organization for over six years. Previously, he taught elementary, middle level and high school orchestra in the Olathe and Lee’s Summit School Districts.

“I have been a music educator for nearly 28 years. . . working with kids is in my blood and soul! Nothing beats an amazing rehearsal with a group of energetic, dedicated, prepared, vibrant and hard working student musicians. In my opinion, our student musicians work just as hard and are as focused as professional musicians. It is also amazing that students as young as 5th grade are able to come together and create beautiful music,” Pieken said.

Pieken is particularly excited about the Academy repertoire for this semester. Youth Symphony’s April 10 concert at the Kauffman Center for the Performing Arts will include pieces from Mozart, Vaughn Williams and Sibelius. Additionally, Academy will be performing Adagio for Strings and Organ by Thomaso Albinoni featuring Grammy-nominated organist Jan Kraybill performing on the Julia Irene Kauffman Casavant Organ in Helzberg Hall.

His enthusiasm doesn’t only lie with the music.

“I am excited to work with our amazing and hard working Academy Orchestra members. I am also honored and humbled to be working side by side with Maestro Russ Berlin, a life-long friend and mentor of mine. It is truly an honor to always learn from and work with Russ!” he said.

And don’t worry, he feels he has a lot to offer Youth Symphony musicians.

“Well, to be honest, I am really looking forward to trying out my new repertoire of bad Dad jokes with the group!” Pieken said.