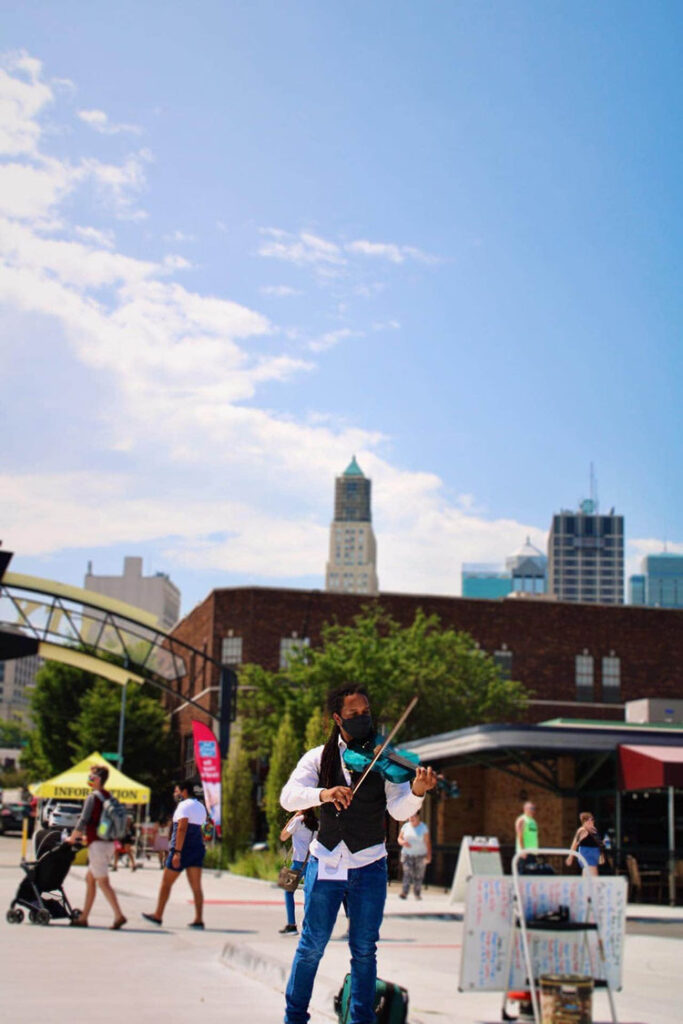 Jordan Williams graduated from Truman High School in Independence, Mo in 2014. He began playing the viola in seventh grade and was a member of Youth Symphony of Kansas City for three years.

Jordan attended Vanderbilt University where he studied Civil and Environmental Engineering. While there, he also took Viola Performance classes under Katheryn Plummer at the adjoined Blair School of Music.

Williams is currently a Civil Engineering Intern working in Land Development and Consulting. He brings his viola whenever he travels and loves to play in parks and public areas all over the world.

Are there any instruments you play besides viola?

Before viola, I took accordion lessons for two or three years with Terry Bell and Kathee Gibbs. I think I had my first accordion lesson when I was six years old, but I definitely can’t pass muster on that thing now.

Where did you attend university and what did you study?

I studied Civil and Environmental Engineering at Vanderbilt University. I took a few electives in Viola Performance under Katheryn Plummer at the adjoined Blair School of Music.

What is your current career?

When you graduated high school and headed towards a career that didn’t involve music, what were your thoughts on how music would be part of your life?

I knew that studying music had helped me develop my communication and mathematics skills and given me a great tool for interacting with people no matter where they come from or how I met them. 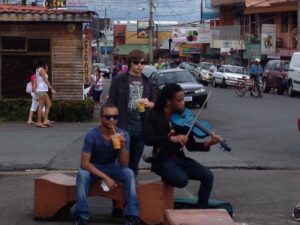 What do you like about performing casually in public?

There’s zero stress to it. People just appreciate the performance for what it is, in whatever way they want. Its kind of like a back door into having a really deep experience of a place. If you play music somewhere, you belong there, and that place becomes a part of you and your art forever. It’s dope.

Where are some places you’ve played in Kansas City?

I’ve played in the Crossroads, on 18th and Vine, the Country Club Plaza, The River Market, and at 3 Trails in Independence. Obviously, while I was with the Youth Symphony we had the opportunity to perform at the Kauffman Center.

Where are some places you’ve traveled and performed?

I’ve busked on the main drag in Nashville and outside their Parthenon. An old street performer let me borrow his violin in Florence, Italy and I played Hungarian Dance No. 5 with his accordion accompanist. I put on a little performance in a little town in Honduras called El Picacho. I was once practicing in a park in Costa Rica and people actually stopped to tip me. I take a viola with me most places I go.

What inspired you to bring your viola on your first trip abroad?

I think I just recognized that it was an important part of who I am and how I experience things. Darth Vader’s got to have his theme music, I’ve got to have my viola. If I don’t, it’s like I wasn’t fully there. Why waste the opportunity?

What are some differences you noticed playing in public in Europe versus America?

I definitely wasn’t as nervous about police in Florence. Maybe I should have been, but I think it was still pretty obvious that I was a harmless tourist. I think if I had asked a busker in most any place in the US if I could borrow their violin for a spell, I could expect at best an incredulous look. But I wouldn’t say that’s European, just a, “that particular man, at that time in Florence, Italy,” thing.

Can you describe some interactions you had during those public performances?

I can vividly recall a woman coming up to me and requesting Ashokan Farewell, which has a pretty simple melody to play. She explained that she was going to record for her brother, who had just lost his wife, and that was their song. Without a doubt, I’ve never performed that song better. I could really feel that it mattered. That’s the kind of interaction I have pretty much every time I go out to perform. It’s truly a blessing and a gift. Thank you to all my music teachers, conductors, and fellow performers for getting me to this point (Allison Ross and Katie Benyo, just to name a couple more). Then again, sometimes you get drunk dudes who reach into your bucket and play with the money. It’s all part of the gig.

Can you tell me about visiting Honduras with Global Brigades?

Global Brigades has trips students can pay to go on, and then do some fairly basic work. Most of what I did was ferry a GPS device around to get elevations for a water distribution system. We also helped lay a bit of pipe for an earlier project that was underway. Before we left, some of the folks in the town requested that I perform for all of them since they’d seen me dragging around this dang instrument case. That was probably my greater contribution. It was definitely a worthwhile trip for me. It reinvigorated my passion for civil engineering. I like to think we did some good for the town we were helping as well.

What are some other ways you’ve incorporated music into your adult life?

I’m big into themed playlists. I have playlists for parties and I makes playlists to share with people as presents. I use playlists to set the mood when I’m running tabletop games and I make playlists when I need to process events that conjure up difficult emotions – like when the verdict was announced in the Derek Chauvin trial. I still make a little money performing on the side – money I often find some way to give away. Every cent is both a reminder of how generous people can be, and an encouragement to emulate and magnify that generosity.

What would you say to student musicians that love playing but may not pursue a career in music?

We’ve got the easier job of pursuing music at our leisure and letting it find us when we need it. I don’t think I could ever make music my life, but I could hardly imagine my life without music. Even if you’re not making music a career, It’s worth it, and so are you and everyone else who will nonetheless be enriched by your talent, skill, and love.