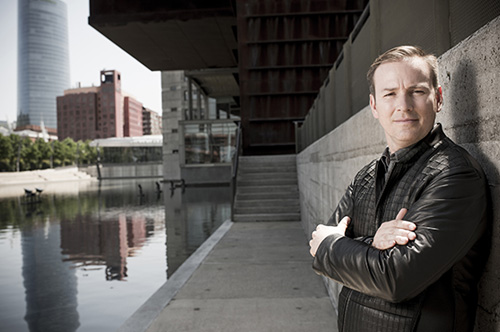 Erik Nielsen has studied and conducted all over the world. Nielsen attended Sumner Academy of Arts and Science in Kansas City, Kan. and played the oboe and harp in Youth Symphony from 1988-1995. He studied harp at Juilliard School, and conducted at Curtis Institute of Music, Philadelphia. He was Kapellmeister of Frankfurt Opera from 2008 to 2012, and was appointed chief conductor of the Bilbao Symphony Orchestra in 2015.

What Kansas City high school did you attend and when were you involved in Youth Symphony of Kansas City?
I attended the Sumner Academy of Arts and Science in Kansas City, Kansas and was part of Youth Symphony from 1988-1995 on oboe and harp. 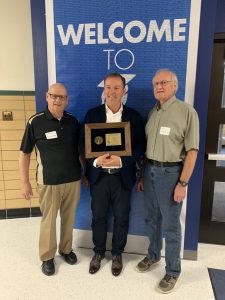 I auditioned for the Academy in Berlin in 1999 but had already just been accepted for the Curtis Institute’s conducting program. Marie-Pierre, who herself studied at Curtis, encouraged me to go there for two years to study conducting and two years later, she offered me the Academy position. On July 1, 2001 I moved to Berlin.

What are some difference playing and/or conducting with European orchestras versus American orchestras?
An American orchestra has a rhythmic precision, so that the conductor’s gesture is very much immediate and in sync with the players. A European orchestra, particularly of the German-speaking variety, works more like a chamber ensemble. The conductor gives a gesture, but the musicians might wait for another voice similar to being in a string quartet, making the gesture’s meaning less about precision and more about sound. For example, when playing next to Marie-Pierre Langlamet, she asked me once, “Who are you listening to?” I said, “the cellos.” She said, “I’m listening to the trombones.” So from then on, for that passage, I listened to the trombones! It was never a question of watching the conductor.

Although quite a mystery at the start, in the end, a European orchestra does function very organically, and in the best cases as a true collective.

How did YSKC play a role in your musical career?
I played lots of the core symphonic repertoire, like Brahms’ Frist Symphony, Rimsky-Korsakov Scheherazade, Beethoven’s 7, etc. as principal oboe. I had the best seat, right in the middle of the orchestra. One hears every voice of the orchestra from the center. The violas are out of tune, the 2nd bassoon is too soft, the trumpet is early, etc. Playing in the orchestra every week became a kind of imaginary rehearsal for me as a conductor.

Can you describe in detail one of your favorite YSKC memories?
I always enjoyed the start-up camps at the beginning of the season, often over the Labor Day Weekend. “Who was new?  Who was returning?”

The Youth Symphony did a tour of Spain, and one stop was at the EXPO 92 (1992 in Seville, Spain). I happened to be working in Seville last summer and took a walk around the EXPO.  It is a ghost town and the whole area is behind chain-linked fences, like out of a disaster film! We had many fine concerts on that tour and I remember one concert in a church, when we played in tennis shoes, because our concert shoes went briefly missing.  The orchestra played a very good concert in Valencia (Beethoven’s Egmont Overture and “Dvořák’sNew World Symphony). I remember having a very good reed for that concert.