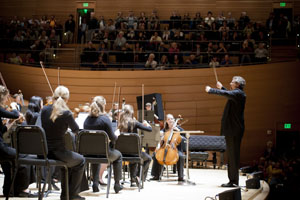 The mission of the Youth Symphony of Kansas City is to challenge, educate and inspire students through meaningful and enriching musical experiences.

The first concert was held on September 6, 1958 at which time Mayor H. Roe Bartle proclaimed the week as “Youth Symphony Week”.

In 1959, Conductor Scheer resigned and was replaced by Richard Cormier, a member of the then-Kansas City Philharmonic (now Kansas City Symphony) and faculty member at Park College (now University).
In 1964, the organization added a younger orchestra the “Junior Youth Symphony” due to increased demand. The Youth Symphony toured Chicago, Washington D.C. and New York, performing at the 1964 World’s Fair in New York.In 1961, Conductor Cormier resigned and was replaced by Jack Herriman, associate conductor of the Kansas City Philharmonic. In the same year, the organization changed its name to “Youth Symphony of Kansas City and also joined the American Symphony Orchestra League – now known as the League of American Orchestras.  The Symphony also recorded a concert for New York radio station WNYC.

In 1978, Conductor Herriman resigned and was replaced by Michael Krajewski. Conductor Krajewski served until 1983, at which point Conductor Glenn Block was hired.

In 1991 a third orchestra was formed to accommodate the growing number of talented young musicians. The orchestras were renamed to Senior, Middle and Junior Orchestra. In 1995, these names were again changed to Symphony, Philharmonic and Symphonette, respectively.

In 1997 the Symphony toured New York and performed at Carnegie Hall in June.

Mr. Block served as Music Director of the Symphony Orchestra until 2007, at which point current conductor Steven D. Davis was hired.